Soyrizo Potato Tacos (made with soy chorizo) are vegan and gluten-free. They are easy and delicious to make for Meatless Monday, Taco Tuesday, or any day of the week!

You may have had potato tacos before, but this recipe adds another layer of flavor and texture by adding soy chorizo, otherwise known as soyrizo.

My friends and family love these tacos. In fact, when I've served them to omnivores, they couldn't believe they weren't eating meat! 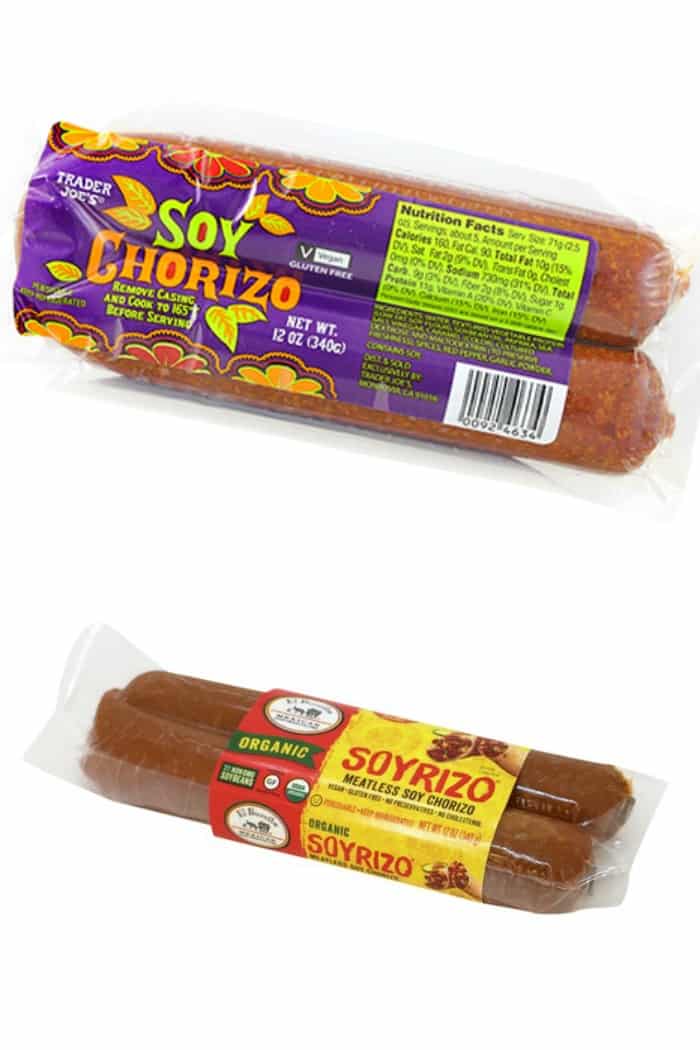 Soyrizo is easy to find in most supermarkets. I've purchased it everywhere from Trader Joe's to Albertsons (Safeway) to Whole Foods. It's usually sold in 12 ounce packages.

All you need to do is remove it from the plastic wrap and heat it in a pan. One of the most popular ones I see is El Burrito Soyrizo.

It's affordable and can easily serve four to six people. And the Trader Joe's version is even cheaper. It has a similar taste, but it's a lot less greasy.

Of course, soyrizo isn't what I would consider a low-fat food on its own, but we're combining it with potatoes and only using a relatively small amount for each taco. It provides an incredible flavor from spices such as garlic, chilies, and paprika.

Making these tacos is easy.

It's not necessary to use any oil when you saute the soyrizo. I find it helpful to use a non-stick pan, but you don't need to if you prefer to avoid them.

For the potatoes, you can either roast them in the oven, or do what I did and prepare them in an Air Fryer. I love using the air fryer, especially in the summer, because then the house doesn't get too hot from using the oven.

In fact, ever since I got an air fryer, I rarely use the oven. I highly recommend them!

As far as toppings go, the sky is the limit. I really love topping these tacos with guacamole. The cool avocado balances out the spicy filling.

I also add tomatoes and lettuce. Other options include diced onions, chopped black olives, and shredded cabbage. And, of course, hot sauce, if you like your tacos extra spicy.

In addition, the potato-soyrizo filling is delicious in a taco salad. I love using the leftovers this way. If there are any, that is. 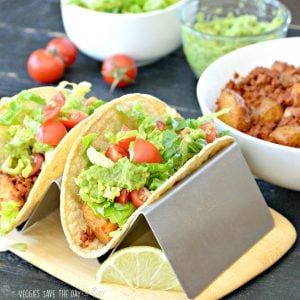 Prevent your screen from going dark

To warm the tortillas, I recommend heating them in a skillet for about a minute on each side over medium heat. As I heat each one, I stack them in an insulated fabric tortilla warmer to keep them ready to go for up to an hour! The potatoes can be cooked in either an oven or an air fryer.
SUBSCRIBE to Veggies Save The DaySign up today! JOIN BY CLICKING HERE