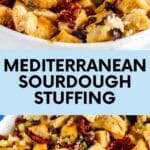 This Mediterranean Sourdough Stuffing Recipe is full of flavor from olives and sun-dried tomatoes. It's a fresh take on traditional holiday stuffing and really easy to make.

I used to think I had to buy boxed stuffing mix to make the Thanksgiving favorite at home. But starting with a loaf of your favorite sourdough bread provides a better flavor and texture.

This sourdough stuffing recipe features classic ingredients like onion, celery, and herbs. But it's made vegan Mediterranean-style by using olive oil instead of butter, and by adding Kalamata olives and sun-dried tomatoes.

It's a perfect addition to your holiday menu. And it pairs well with other favorites like olive oil mashed potatoes, stuffed acorn squash, and cranberry raspberry sauce.

Why you'll love this recipe

Sourdough bread: I recommend vegan gluten-free sourdough from Bread SRSLY in San Francisco. Even those who aren't gluten-free love this bread, and it freezes well. Use code veggiessavetheday for $5 off your first order.

For the complete list of ingredients with measurements plus recipe instructions, please see the recipe card at the bottom of this post.

Save some prep time by purchasing pre-sliced Kalamata olives and julienned sun-dried tomatoes.

Step 1: Cut the bread into cubes and spread them out on a rimmed baking sheet.

Step 2: Bake, tossing halfway though, until dry and crispy.

Step 3: Saute the onion in olive oil until soft and slightly translucent.

Step 4: Add the celery and garlic and continue to saute until soft. Stir in thyme, rosemary, salt and pepper, olive, and sun-dried tomatoes.

Step 5: In a large bowl, toss together the dried bread cubes and the onion mixture until very well combined.

Step 6: Transfer to a casserole dish. Pour over the vegetable broth. Let the dish sit for about 20 minutes so the bread absorbs the liquid. Then bake, uncovered, until lightly browned on top.

This sourdough stuffing recipe is easy to customize to suit your taste.

This Mediterranean sourdough stuffing recipe is perfect for your Thanksgiving or Christmas table. It also pairs well with other vegan holiday dishes.

For main dish options, serve it with a veggie roast, lentil meatloaf muffins, or tofu meatballs with mushroom gravy.

Leftover stuffing can be covered and refrigerated for 3 to 4 days or frozen for up to a month.

For tips on freezing, refer to USDA Freezing and Food Safety.

Does bread for stuffing have to be stale?

While it's important that bread for stuffing be dried, you can use fresh bread that is "staled" in the oven. Cut the bread into cubes and bake them until dry and crisp.

Is sourdough a good bread for stuffing?

Absolutely! Sourdough gives stuffing a delicious flavor and texture. You can use homemade sourdough or purchase a loaf that hasn't been sliced, if possible.

What's the difference between dry and oil-packed sun-dried tomatoes?

Sun-dried tomatoes are sold in two forms: Dry and packed in oil. To use the dry ones you will need to first rehydrate them in hot water to soften them. The ones in a jar packed in oil are already plump and ready to use.

And for even more recipes, join the Vegan Mediterranean Diet Recipes Facebook group for support, inspiration, and fun. 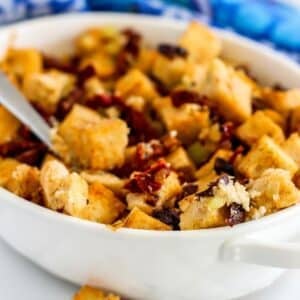 US Customary - Metric
Prevent your screen from going dark

*I recommend vegan gluten-free sourdough from Bread SRSLY in San Francisco. Even those who aren't gluten-free love this bread, and it freezes well. Use code veggiessavetheday for $5 off your first order. Leftover stuffing can be covered and refrigerated for 3 to 4 days or frozen for up to a month.
SUBSCRIBE to Veggies Save The DaySign up today! JOIN BY CLICKING HERE