Instant Pot Vegan Potato Leek Soup is smooth and creamy without using any dairy. And it's easy to make in 30 minutes.

Recently I was set to make Potato Corn Chowder when I remembered I had some leeks in the refrigerator.

So I decided to try my hand at making a vegan potato leek soup in the Instant Pot.

And the results were incredible!

Not only was the soup quick and easy to make, it was velvety and rich.

All without using any dairy!

How to clean leeks

One of the most important steps in making Vegan Potato Leek Soup is properly cleaning the leeks.

Leeks are grown in sandy soil, and the bits of sand tend to get in the layers of leaf sheaths.

And the last thing we want is sand in our soup.

But fortunately cleaning this cousin of onion and garlic is relatively easy.

We only need the white and light green parts of the leek, so first I remove the tough green tops.

Then I slice the leeks lengthwise and clean them in an ample amount of water.

In addition, it helps to rinse them again after you've chopped them to make sure no grains of sand remain.

This step-by-step tutorial How To Clean Leeks is very helpful.

Once the leeks are clean and diced, we're ready to make our Vegan Potato Leek Soup.

However, the vegan version is equally delicious made with vegetable broth and cashew cream.

And for the seasoning, I love using herbs de provence.

This French blend is typically a mix of savory, marjoram, rosemary, thyme, oregano, and lavender.

But if you can't find herbs de provence, you can substitute Italian seasoning or your own mix of herbs such as oregano, rosemary, and thyme.

Now get out your Instant Pot, and let's make Vegan Potato Leek Soup! 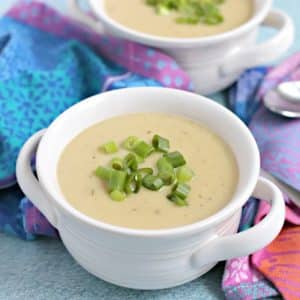 US Customary - Metric
Prevent your screen from going dark

If you don't have a high-speed blender, soak the cashews in hot water for 3o minutes or longer to soften before blending. If you don't have an immersion blender, you can transfer the soup to a regular blender in batches, being sure to vent the lid so the steam can escape. This recipe serves 4 people. If you want to double the recipe, the 4 minute cooking time will remain the same. However, it will take longer for the Instant Pot to come up to pressure. Leftovers can be stored in the refrigerator for a few days and reheated on the stove or in a microwave.
SUBSCRIBE to Veggies Save The DaySign up today! JOIN BY CLICKING HERE